This is Mr. Andrew Carnegie, once the richest man in the world.

He arrived in America with no money and with no formal higher education. 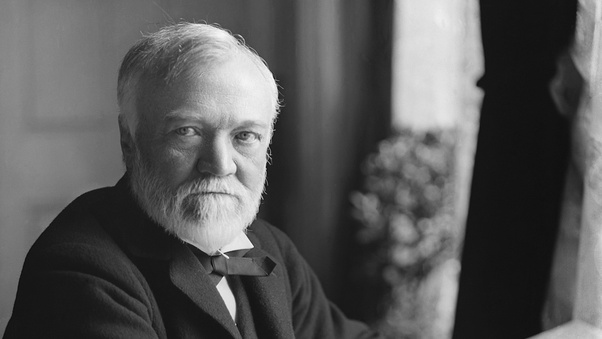 His parents decided to move the Carnegie family to the United States in 1848 after a famine hit the Scottish countryside. When he arrived in America at thirteen years old, he found a job that would pay him $1.20 for a 70-hour week.

During his free time, Carnegie read books loaned to him from one of the local libraries. (Later in his life, he never forgot how important these books were to his life, so he donated his money to building over 2,500 public libraries and important educational institutions around the world.)

When Carnegie was about 18 years old, Thomas Scott, the owner of the Pennsylvania Railroad Company, employed him as a telegraph operator at a salary of $4.00 per week.

By age 24, Mr. Scott saw great potential in the young Carnegie, and asked him if he could handle being superintendent of a division of the Pennsylvania Railroad Company. He took the role, and his relationship with Mr. Scott grew stronger.

Mr. Scott later became Carnegie’s mentor, which lasted until 1878, when Scott suffered a stroke that limited his ability to work. Despite this layoff in interaction, the relationship through the previous years changed Carnegie’s future.

The experience gained working closely to Scott was a vital ingredient in his extraordinary success in the steel industry. Selling his company to JP Morgan would later make Carnegie the wealthiest man in the world and the extraordinary philanthropist he later became.

Meghan Markle’s Preggy! Duke and Duchess of Sussex are expecting a Baby!!

Taylor Swift’s Star Studded Fancy Dress Party to usher in 2019 & what other stars did..

The police under my watch forced ex-President Jonathan to accept the result of the 2015 poll through our professional conduct. Former IGP

Welcome To the Reality Show: Keeping Up With The Ikejis.

Nicki Minaj’s everything on display outfit takes down the VMA…..Assin

The Killing Of Alex Badeh And The Troubling Comments About Death

Madonna clocks the sexy 60; Here’s how she kept her thing tight